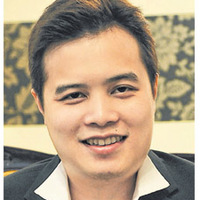 Terence is the founder and CEO of Azure Capital.

Voted as the Best Country Analyst in the Asiamoney Brokers Poll, Terence managed RHB Investment Bank’s multi-award winning research team in Singapore prior to founding Azure Capital. RHB was named the top research house in the Starmine Analyst Awards in 2013 and 2014, and has consistently been ranked #1 for small cap research by Asiamoney.

Terence constantly shares his views on the stock market with the media despite looking less svelte on TV than the actors he is said to resemble. He is also well-quoted across both international and local print media. Terence has spoken before more than 25,000 investors in over 150 seminars. He believes this is an industry record, but has yet to verify with the Singapore Book of Records.